In any construction project, attention to detail is vital. It’s the difference between an amicable partnership with a happy client, and a negative review ending up on your online profile.

Punch lists are the best way of ensuring that you’re keeping a close eye on detail. As a final review of everything that was completed during the project, a punch list is used as your final assurance that everything was done up to par, and there are no disagreements with your client.

A punch list is a document that is created by a general contractor that lists every task that must be completed before a project can be considered as done. Each item that is on a punch list is characterized by it’s name, item number, date of completion, general description, general location, and any notes that come with it. While punch lists may vary between contractors, Defectspro.com has a quick list of what you should include in yours for each item:

According to Esub.com, the five most common items found on a punch list are:

As you can see, these aren’t always the biggest parts of a project, but they’re necessary to include to make sure that the construction team has done their job correctly.

Punch lists are often created at the end of the project. This is usually referred to as the point of substantial completion, which is when the owner can safely occupy the space where the project was. From this point on, the owner is considered to be responsible for the building instead of the contractor.

If you’re a general contractor, then it’s your responsibility to create the punch list. You’ll also have to lead the rest of the parties involved through the process of completing it, which we will go through later.

Why is it necessary?

A punch list gives proof that every task was completed in a project, according to the specifications of the contract. It will also list any deficiencies or changes that had to be made during the project, so the homeowner will be aware of having to pay for anything extra.

Technically, punch lists aren’t mandatory, but they’re an incredibly helpful step to take if you want to avoid any disputes with your client. After all, you don’t want them to think that you’re scamming them.

Who are the parties involved?

There are four main parties to a punch list: the contractor, the client/homeowner, the architect/designer, and the subcontractor. The responsibilities of each are as follows:

In general, a punch list that includes all of the elements listed above should look something like this: 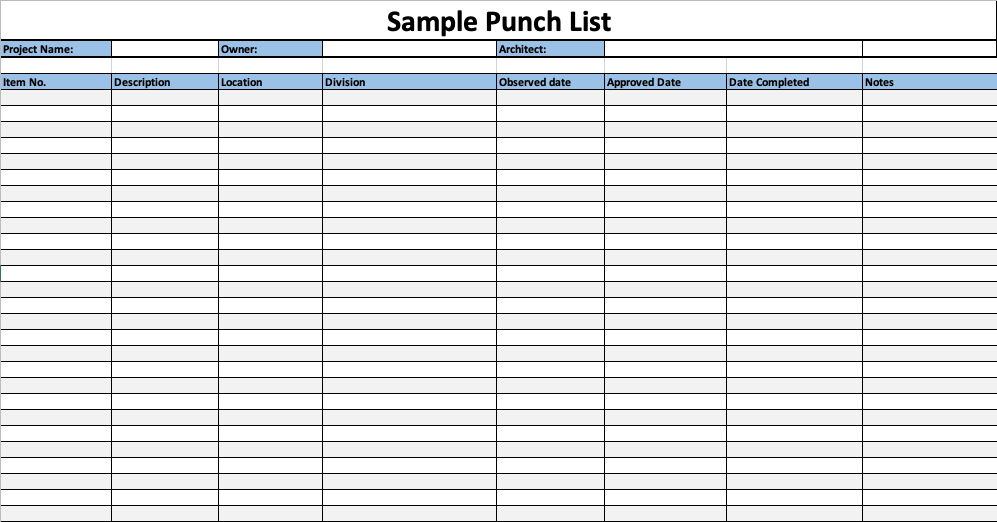 There are also a variety of construction software programs out there that can generate punch lists for you. Procore, for example, has its own system that lets you input each item with its own title, assignee, deadline, and more.

In any case, the common step-by-step process to follow in creating and executing a punch list is:

It may seem like there is always an extra step in the construction process, but it’s our best advice not to skip this one. As common as disputes are in the business, they can largely be avoided by using this method of checking your work before handing things back over to the client.